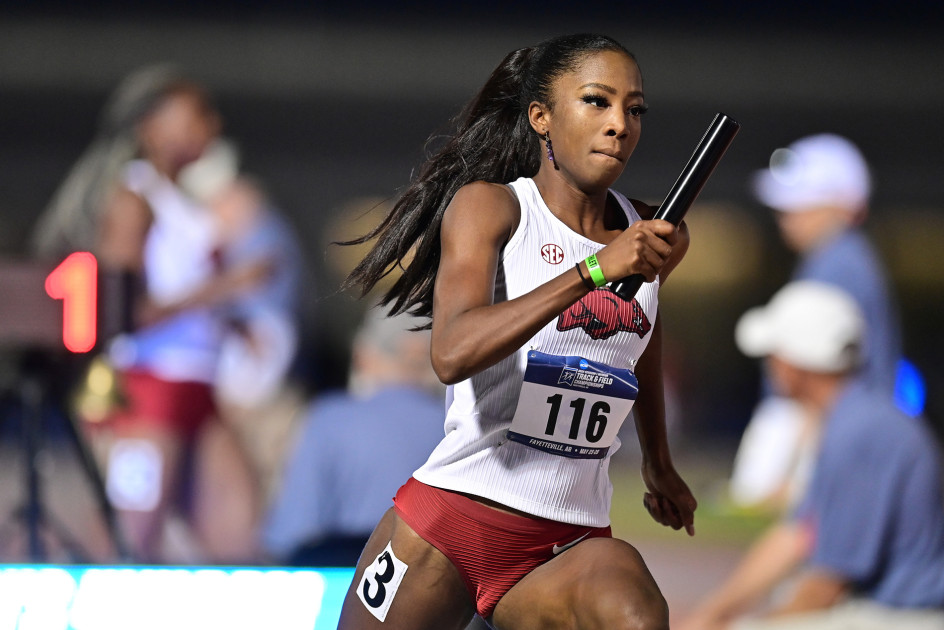 FAYETTEVILLE – Arkansas turned the final day of NCAA West prelims into their own NCAA selection celebration as the Razorbacks added 10 entries to their list of athletes traveling to Eugene for the NCAA championships.

In front of 1,420 spectators at John McDonnell Field on Saturday, nine Arkansas athletes were seen advancing in eight more events, with five qualifying in two events.

The total number of Razorbacks going to the NCAA Championships at Hayward Field includes 12 athletes in 10 events for 14 entries.

“We’re very excited about what we can potentially accomplish in Eugene,” said Lance Harter, Arkansas women’s head coach. “It was a great weekend for us and we have a lot of chances to score.

“This is a meeting that’s always scary for any coaching staff because every time the gun goes off there’s a chance different things could happen. We basically came through this meeting unscathed.”

The Razorbacks’ time is also the fastest ever recorded in prelim history — in both the East and West Regions.

Burks-Magee started in blocks, shared 52.40 and had a lead over USC on the first exchange. Effiong then fired a 50.50 second leg to give Arkansas a second and a half lead over the Trojans. Baylark completed the third leg in 52.50 as the lead increased to almost a full two seconds.

“Morgan is really starting to show her maturity and balance as a racer,” Harter said. “She comes out of the hole and takes us to the front. After that we walked alone. Rosey and Jada did an amazing job. When Britton is that far ahead, what are you going to do for an encore, just run as solid as you can.

The day began with Krissy Gear finishing second in the opening 1500m in 4:18.97, behind a 4:18.93 of Colorado’s Micaela Degenero. Then Yoveinny Mota raced to a career best 12.87 (1.8 wind) second in her run to move up to No. 4 on the UA all-time list and improve on her Venezuelan national record.

“A highlight was Yoveinny having a great hurdle race with a legal touch, that was exceptional,” noted Harter. “Krissy Gear has shown that she can handle anyone in the 1500m and that was a great way to start the day.”

Logan Jolly posted a 9:47.43 second in the third leg of the 3,000m steeplechase and it was the second fastest overall time behind BYU’s Courtney Wayment, who won the third leg in 9:42.32.

Lauren Gregory added the 5,000m to her 10,000m qualification from Thursday. She will be one of four promoted from the NCAA West in both distance races. Gregory was joined by Colorado’s Emily Covert and New Mexico’s Amelia Mazza-Downie and Emma Heckel.