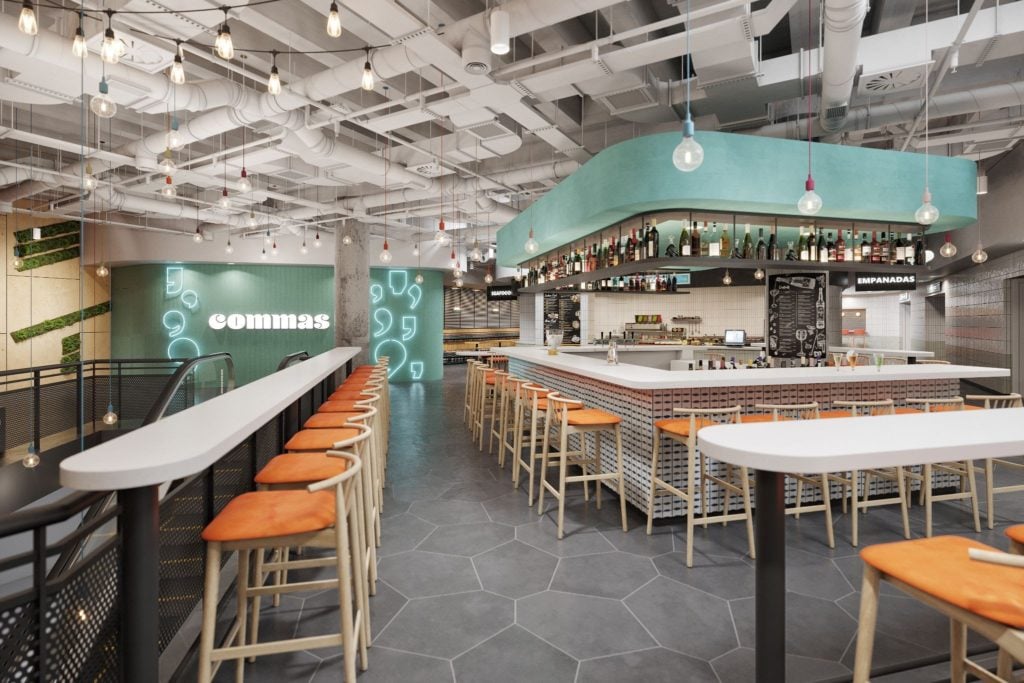 A food hall called Commas is coming to Silver Spring

The Commas Food Hall will be located on the second floor of the Ellsworth Place Shopping Center in Silver Springs. Rendering courtesy of Grizform Design Architects.

Did we think we had already reached the Peak Food Hall? Not so! Another will travel to Silver Spring next year.

Commas – yes, it is named after the punctuation mark – is supposed to symbolize “the countless possibilities for eating and being together”. (We strongly advocate that the DC pop-up Ampersandwich be included.) Specific concepts or participating chefs have yet to be announced, but the 12 food and drink vendors will cover a range of cuisines including Ethiopian, Korean, Italian and Salvadoran. The 13,000-square-foot venue, which occupies the second level of Ellsworth Place Shopping Center, will also have seven communal seating areas as well as a central bar for happy hour and late night drinks.

Commas comes from the Baltimore-based retail and mixed-use developer GBT Reality Corporation and Cana Development, which are also involved in Foggy Bottom’s newly opened Western Market grocery store. It’s also just the latest from a slew of new grocery halls on the way for the next year. Heights’ sleek looking Food Hall (with an adjoining speakeasy style bar) is slated for next spring in Friendship Heights. Japanese-inspired Love, Makoto will bring omakase sushi, udon noodles, and mochi to DC’s Capital Crossing development later this year. And a huge food hall with 18 vendors, the Market at International Square, will open next year in downtown Richie Bradenburg, the former culinary thought leader of Union Market, and ThinkFoodGroup alum Rubén García.

Jessica Sidman shares the people and trends behind the DC food and drink scene. Before joining Washingtonian in July 2016 she was the Food Editor and Young & Hungry Columnist for Washington City Paper. She is from Colorado and graduated from the University of Pennsylvania.

When Halloween was a drag queen celebration in Detroit