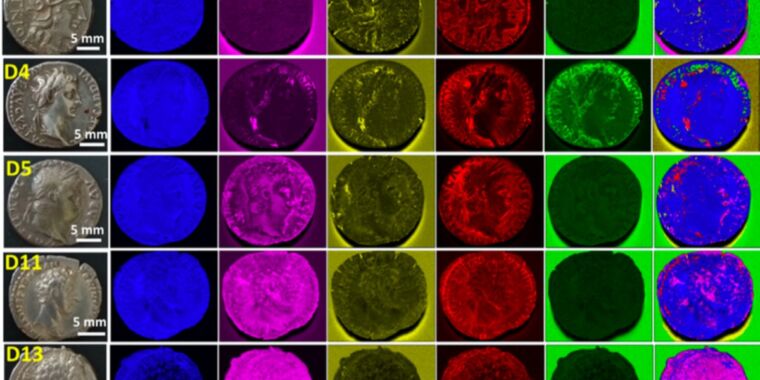 Most people associate atomic physics with atomic bombs or nuclear power plants, and these associations are often negative. Michael Wiescher, a nuclear physicist at the University of Notre Dame, wants to change that perception by using his expertise – and some of his sophisticated imaging hardware – to do research that connects science, history and culture. His work in this area included collaborations to analyze a rare medieval manuscript and uncover currency fraud and counterfeiting throughout history, particularly in ancient Rome and colonial America. He described these efforts at a recent virtual meeting of the Department of Nuclear Physics of the American Physical Society.

Much of this work was done in collaboration with students of physics, chemistry, art restoration, history, and anthropology as part of a course that Wiescher teaches in Notre Dame on physics-based methods and techniques in art and archeology. Students can be certified as operators of a wide range of advanced physics-based instruments and techniques. These include Raman spectrometers, transmission electron microscopes (TEM), a 3MV tandem accelerator, portable X-ray fluorescence (XRF) scanners, micro-XRF scanners and X-ray diffractometers.

The course covers topics such as non-destructive analysis of the Vermeer paintings and the Archimedes palimpsest; Tracing the inks used by medieval scribes on illuminated manuscripts; whether the Vinland card is real or a fake (it was recently conclusively shown that it was a fake); Using studies of the Turin Shroud to discuss uncertainties in carbon dating; and reviewing how Luis Alvarez once used cosmic rays to search for hidden chambers in Egyptian pyramids in the 1960s.

One of Wiescher’s projects in 2016 was an analysis of a rare Breton illuminated manuscript from the 15th century. Wiescher and his colleagues combined micro-XRF elementary mapping with Raman spectroscopy to gain deeper insights into the production of the illustrations of the manuscript and the pigments used. The first technique shows the elements present as well as individual pigment particles and their distribution over the regions of interest. The latter is ideal for analyzing selected areas in order to reveal the molecular composition of the pigments. Based on their findings, Wiescher and his co-authors concluded that the Breton manuscript was likely the work of a single artisan, or perhaps a small number of artisans working with a single pallet.

Wiescher turned to the Roman denarii in 2019. According to Wiescher, the Roman silver denarius was between 200 BC. And 300 AD the backbone currency of the Roman Empire. During Nero’s reign, the coins had to be 92.5 percent silver to protect the currency from inflation and devaluation. Despite the emperor’s reputation for tyranny and debauchery, “Nero was one of the most financially responsible of his ancestors and successors, who obeyed the law when minting coins,” said Wiescher.

The analysis of the coins from 250 BC BC to 350 BC However, showed falling silver percentages. According to Wiescher, the Roman mints gradually devalued the denarius in order to increase their profits and to facilitate the financing of ongoing wars in the empire. The mints relied on certain metallurgical techniques to hide the lower levels of silver in order to keep inflation in check. By 295 AD the silver content was only about 5 percent.

Wiescher and his students combined the XRF scaling with the PIXE mapping of the coins to test the quality of the currency and learn more about the production techniques. They also used electron spectroscopy to measure the silver content of each coin and the distribution of impurities. Their analysis found that most coins are made of silver and copper, and that sulfur and iron impurities caused corrosion in some.

Merchants would typically test all coins offered as tender by biting on them as they should be able to taste the silver. This would expose any attempt to compromise. “So the Romans invented a number of interesting metallurgy technologies to hide [that debasement]“, Said Wiescher. For example, if you toss a mixed silver-copper coin into liquid mercury, the silver will dissolve and flow around the coin. “said Wiescher. This gives you a silver coin with a copper core that can pass the bite test.

The same trick of replacing some of the silver in coins with copper reappeared thousands of years later in the Latin American colonies of Spain. Wiescher analyzed 91 silver rials from Mexico and Potosi, Bolivia, which were dated between the 16th and 18th centuries. Between 1645-1648 the silver content sank from 92.5 percent to only 70-80 percent; the rest was an admixture of copper. When this was discovered in the 17th century, the silver market in Spain collapsed and coins were devalued, with devastating effects on the Spanish colonial economy, Wiescher said.

Some of this silver from Spain and Mexico eventually ended up in the early American colonies. The colonies initially adopted the Native American barter system, trading furs and strings of decorative seashells known as wampum, as well as grains and imported finished products such as nails. But the Boston Mint used Spanish silver to mint coins between 1653 and 1686 and again added a little copper or iron to boost their profits.

The first paper money appeared in 1690 when the Massachusetts Bay Colony was printing paper money to pay soldiers for campaigns against the French in Canada. The other colonies soon followed suit, although none of the currencies had a uniform value system. To combat the inevitable counterfeiters, government printers sometimes made notches in the cut of the bill that were checked against government records in order to redeem the bills for coins. But this method wasn’t ideal because paper money was prone to damage.

Given this early history, it is appropriate that Benjamin Franklin should be featured on the US 50 cent and $ 100 bill, given his efforts to promote printed currencies and combat counterfeiting in colonial America. When he was 23, Franklin was a successful newspaper editor and printer in Philadelphia, published the Pennsylvania Gazette, and eventually got rich as the pseudonymous author of Poor Richard’s Almanack. He was a strong advocate of paper currency from the start.