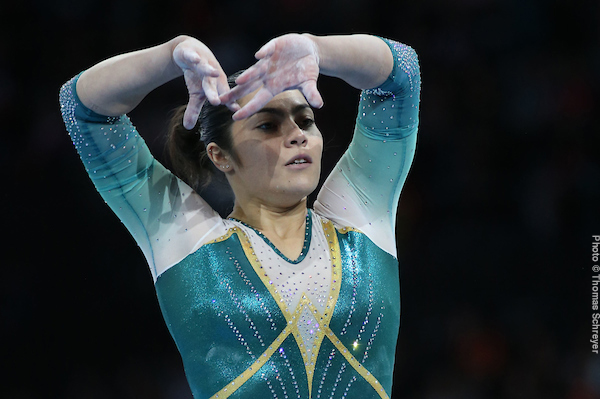 Top Qualifier Alice Kinsella of England, the defending all-around bronze medalist at the 2018 Games, led after two apparatus but fell to fourth place after falls on the balance beam and floor.

Women’s apparatus champions were Godwin on vault, Fenton on uneven bars, McDonald on balance beam and Kinsella on floor exercise.

By just over half a point, men’s all-around champion Jarman beat his England team-mate Jacob Hall, who successfully defended his silver medal from the 2018 games. Hall qualified first ahead of Jarman for the finals where both men improved on their qualifying scores. Cyprus’ Marios Georgiou won bronze as in the 2018 games.

Jarman finished the Games as the most successful male gymnast after collecting four gold medals.

Jarman was born in Peterborough on December 3, 2001 and trains under trainers Ben Howels at the Huntington Gymnastics Club. He was a reserve on the British team at last summer’s Olympic Games in Tokyo and finished third in all-around, first in floor exercise and first in vault at the British Championships in March this year.

After recently recovering from a ruptured appendix and a broken foot, Fraser competed on all apparatus except floor exercise and vault. He went on to win gold on pommel horse and parallel bars, finishing fourth on rings and seventh on high bar in the apparatus finals.

The men’s apparatus champions were Jarman on floor exercise and vault, Fraser on pommel horse and parallel bars, Tulloch on rings and Ilias Georgiou from Cyprus on the high bar.

*Tie broken by highest score of both vaults by both gymnasts (which was Godwin’s score of 13.70 for her first vault)

International Gymnast Online’s most recent coverage of Competitors at the 2022 Commonwealth Games includes:

Canada’s Felix Dolci: “I know what I want and how to get there”

Britain’s Joe Fraser: ‘It’s been one hell of a journey’

UK’s James Hall: ‘I’m now the strongest and fittest I’ve ever been’

Australia’s Stephens: “A risk-free adventure seems boring and pointless, so here I am”