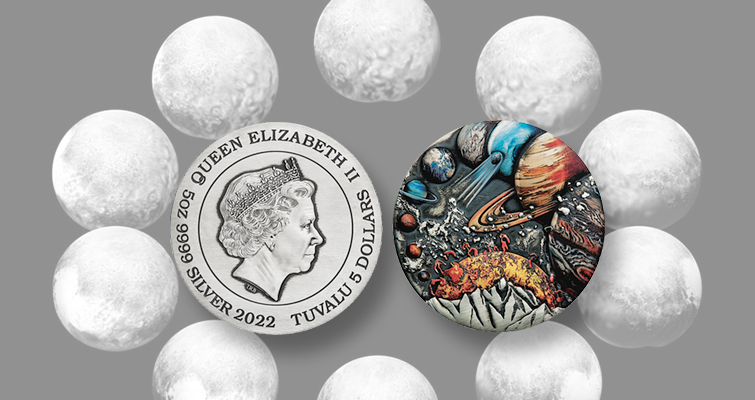 Coin for Tuvalu shows all planets, then some

A new 5-ounce, 0.9999 fine silver $5 coin from Tuvalu reignites the debate over Pluto’s place in the planetary hierarchy.

The 2022 Planets of the Solar System coin features Pluto, a dwarf planet, along with the eight fully named planets and other celestial objects on the reverse, designed by Sean Rogers.

There are no legends on the reverse of the Piedfort coin (double thick) with ultra high relief in antique finish to further emphasize the beauty of the stunning cosmic homage.

Pluto was discovered by American astronomer Clyde Tombaugh in 1930 and immediately joined the ranks of planets. And it did so for more than 75 years, until the International Astronomical Union downgraded Pluto to a “dwarf planet” in 2006.

Distributor Talisman Coins describes the opposite as follows.

“In addition to all nine planets, there is a rocky asteroid in the immediate foreground from which we can enjoy this incredible view of our solar system. Just beyond is the molten sun itself, while the asteroid belt and clouds of dust and gas hover over the center of the tableau. A meteor whizzing past Uranus completes the scene.”

The obverse shows Queen Elizabeth II in crowned profile to the right. This portrait, which shows the Queen wearing a tiara and pearl earrings, was executed by sculptor Ian Rank-Broadley. The legend QUEEN ELIZABETH II, date and denomination also appear. The legend 5 OZ 9999 SILVER identifies the weight and purity.

The coin weighs 155.533 grams and measures 55.9 millimeters in diameter. It is housed in a faux leather clamshell style presentation box and protected by a full color outer box. An individually numbered certificate of authenticity is included.