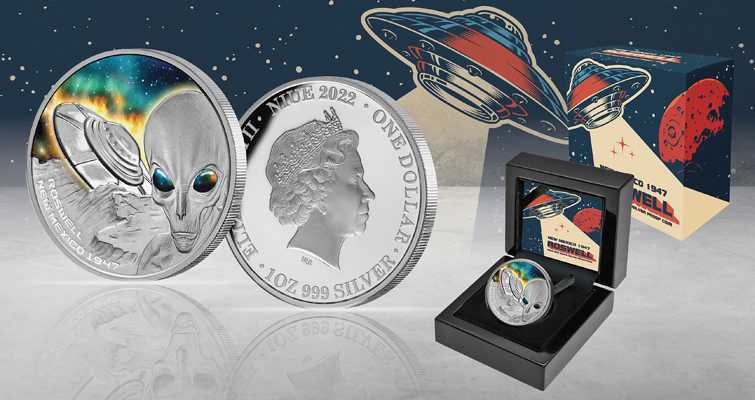 On July 8, 1947, the US Army Air Force Base at Roswell, New Mexico, issued a statement saying they had recovered the wreckage of a “flying disk.”

Shortly thereafter, the USAAF claimed that the debris actually came from a weather balloon, sparking the most controversial and well-known incident in “UFO” history.

In the decades since, an entire industry has sprung up and grown, with tens of thousands annually visiting the town where it all began, Roswell, New Mexico.

Two new 2022 coins further this story, capitalizing on the 75th anniversary of the event – ​​whatever it was.

The incident began on July 5, a Saturday, when a rancher, Mac Brazel, near Corona, New Mexico, discovered some unusual debris in a remote location on his property. On July 7, he took the debris to the Roswell Sheriff.

The sheriff called Roswell Army Air Field, which assigned the matter to Maj. Jesse Marcel. Brazel brought Marcel back to the rubble site, where the two picked up more rubble.

In a signed affidavit not released until after his death in 2005, Lt. Haut said he was taken to a base hangar by a senior officer, where he saw an egg-shaped vehicle about 15 feet long. He said he also observed several small bodies there, around 4 feet tall with large heads. Haut was convinced the bodies were aliens and had come from a crashed spacecraft.

Meanwhile, the debris itself was rushed to Fort Worth Army Air Field on the same day, from where it has never surfaced, prompting a plethora of conspiracy theories that persist to this day.

However, skeptics dismiss the many alien-based theories; One established theory is that the debris came from a balloon that was part of Project Mogul, a top-secret program used to test the atmosphere for evidence of Soviet atomic bomb testing.

At center is a flying saucer that slams into the inhospitable, rocky terrain of remote New Mexico in a fiery crash. Above, a starry sky hints at the origins of the bizarre vehicle, while in the foreground, a gray alien stares at the viewer.

His elongated face is crowned by the oversized skull the Grays are known for. The colors of the cosmos are vividly reflected in the alien’s huge black eyes, his hypnotic and menacing gaze contrasting with the cool silver tones of his skin.

Each coin is encapsulated and packaged in a black clamshell presentation box lined with black velvet.

The full color outer box and certificate both represent the pinnacle of post-war or mid-century 1940s graphic design.

Both coins measure 38.6 millimeters in diameter and weigh 31.109 grams.

The silver coin has a circulation of 750 pieces and is sold out in the pre-release.

The mintage of the gold coin is 75 pieces.

Pricing was unavailable at press time and is likely to be volatile as the secondary market is expected to move quickly, at least for the silver coin.