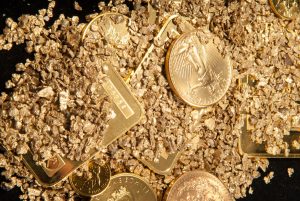 Precious metals fell on Friday, cementing their weekly declines despite a few days of gains. The daily losses were the first of three for gold, silver and platinum and the first of four for palladium.

“It’s been a roller coaster week for me [gold] Thanks to a volatile dollar and fluctuating Treasury yields,” Lukman Otunuga, manager, market analysis at FXTM, told MarketWatch. Gold posted a weekly decline “as investors assess the impact of rising interest rates on global growth.”

Looking ahead to next week, Kitco News offers the following predictions via their Wall Street & Main Street polls:

“This week, 15 Wall Street analysts participated in the Kitco News gold survey. Among the participants, five analysts or 33% were bullish on gold in the near term. At the same time, three analysts or 20% were bearish on gold and seven analysts or 47% were neutral on gold next week.

In PGM prices on Friday and for the week:

Both are lower year to date with losses of 3.7% for platinum and 5.9% for palladium.

The US Mint’s published bullion sales were unchanged this week. Last week’s gains were capped at 2,500 ounces in American Gold Buffalos.

Below is a breakdown of US Mint bullion product sales with columns detailing the number of coins sold over different time periods.