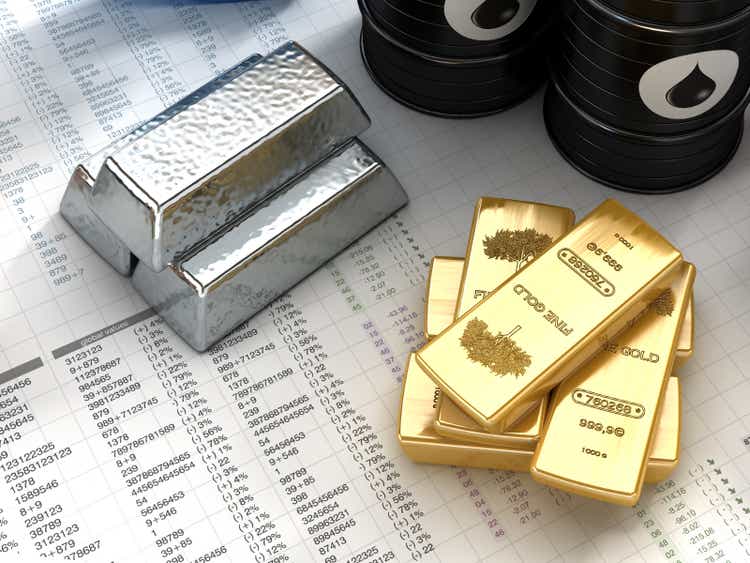 Price analysis over the past month concluded that the market may have capitulated. It indicated that FOMC and GDP could trigger a short squeeze due to the overly bearish COTs report. While gold rallied strongly, it was met with fierce resistance and more Fed hawkish talk. In the face of a major pullback from recent highs, is gold poised to drop through another floor, or is it building support inside the old $1750-$1800 range where it has been trapped for months?

Gold has broken through $1800 at least 10 times in the past two years, sometimes explosively. Each time the gold eventually runs out of breath and falls back down. However, $1750 was an even stronger support, with fewer breaks and smaller moves. $1800 may not be comfortable in the rearview mirror until $2100 is taken out. For now, gold is back in the $1,750-$1,800 consolidation range.

Silver has been more volatile, falling through strong support at $22 in May. Even as gold rallied, silver couldn’t muster enough strength to bounce back.

Outlook: Bearish until $22 is taken out

Gold margin rates are near two-year lows, but that has done little to spark interest. Open interest is also at a multi-year low. This suggests that dry powder is ready to take the next big step in either direction. When open interest gets that low, it generally means that the next move is up.

COTs report shows silver positioning is still net short in managed money. This is a combination of multi-year lows in gross longs and multi-year highs in gross shorts. This suggests that short positions have benefited from lower margin rates. Any increase in margin could result in forced liquidation of short positions.

The gold miners have been driving the price of gold very consistently in both directions. The recent price jump above $1800 has not been confirmed by miners. The last time gold was above $1800 miners were much higher. The past week has seen another poor performance from miners, suggesting that more downside could be on the cards for gold in the coming weeks.

Looking over a long time horizon shows how badly miners have underperformed gold over the past decade. This shows that traders have never confidently bought into gold momentum, assuming price increases will be short-lived. If this trend reverses, gold could start flying higher, led by a burgeoning mining sector.

Love or hate the traders/speculators in the paper futures market, it’s impossible to ignore their impact on price. The charts below show that more activity tends to push prices higher.

Trading volume in gold is near its lowest in years and is poised for a rebound. Silver is closer to average but the COTs report suggests this is likely being driven by the short side. Until the shorts start to get squeezed into silver, this looks neutral rather than bullish.

Price movements can be driven by Treasury market activity or by the US dollar exchange rate. A large rise in the price of gold will often coincide with a fall in US debt rates (a rise in Treasury prices) or a fall in the dollar.

The dollar has been in an absolute downtrend for months (orange line above shows reverse move). DXY broke the resistance at $105 and reached as high as $109 in July. After a brief correction, the DXY is back up with a massive move over the past week. If the DXY breaks the recent high, it could cause further problems in the gold market.

Outlook: Bearish if dollar breaks through

Gold and silver are very strongly correlated, but they don’t move in perfect step. The gold/silver ratio is used by traders to determine the relative value between the two metals. Historically, the ratio has averaged between 40 and 60, so outside of this ban it can signal an impending return to the mean.

Silver is definitely outside the range, meaning either gold will fall or silver needs to catch up.

The table below shows a snapshot of the trends present in the charts above. It compares current values ​​with those from a month, a year and three years ago. It also looks at the 50- and 200-day moving averages. While DMAs are usually only calculated for prices, for the other variables the DMA can show where the current values ​​compare to the recent past.

Gold and Silver are slipping again after the recent recovery from oversold conditions. The charts above are certainly turning bearish, which means caution is warranted. That being said, the data could suggest a bottom is forming and $1750 has proved even more problematic for the bears than $1800 for the bulls.

Gold and Silver were extremely oversold last month and saw a small short squeeze post FOMC and GDP. Last month’s analysis alluded to that possibility. Unfortunately, the upside ran out of steam as the market expected more time before a Fed pivot. The path is now much less clear. Gold could be back between $1750 and $1800. Or a hawkish Fed on the Jackson Hole summit could potentially crack $1750 and open the door to new lows. The gold miners definitely expect this!

On the other hand, the economy is clearly in recession and the Fed is moving very quickly. It will likely be a few more months before they see the first effects of the damage they’re doing, let alone the full impact. The damage in their wake could be catastrophic for the heavily indebted US economy. When the damage becomes apparent, the Fed will change course very quickly. The Treasury Department also needs this quick reversal or the interest on the debt will exceed $500 billion a year.

Caution should be exercised in the near term until gold can climb above $1,800 with confidence, which will likely require prices above $1,850 for an extended period. Silver is in a similar boat, lacking momentum and needing to recapture $22, only to start another run at $25 and even $30.

Long-term investors should not be discouraged by the current market shakeout in metals. The medium-term perspective is far more bullish. The Fed has a very short way to bring inflation back below 3%. Every month this runway gets shorter. The faster they move, the more damage they deal before they even know what happened. A Fed pivot is not a question of “if” but of “when”. When the pivot point becomes apparent, gold and silver will move higher quickly.

Editor’s note: The summary bullet points for this article were selected by Seeking Alpha editors.