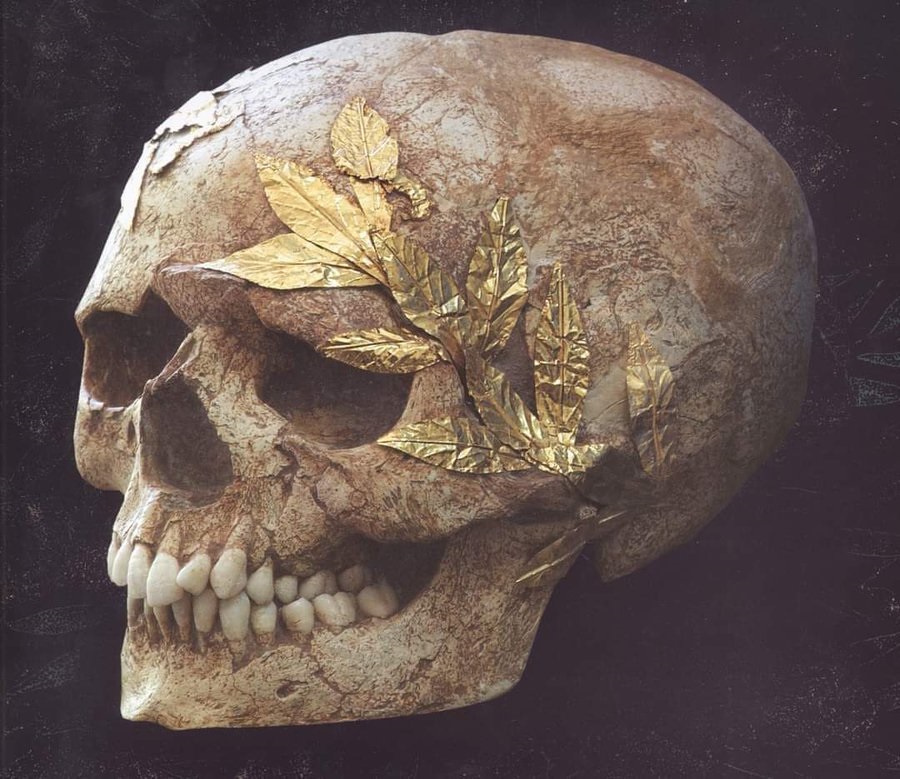 The skull of a crowned athlete, to which a golden wreath in the shape of an olive branch is still attached, is perhaps one of Greece’s most impressive exhibits.

The flesh disintegrated after 2,500 years, but the wreath stuck and stayed on the skull. A silver coin was found inside the mouth as a symbol of Charon, who in Greek mythology was the ferryman of Hades who carried the souls of the newly dead to the underworld.

The skull was found in the cemetery of the ancient city of Lato and is now one of the most spectacular exhibits in the Museum of Agios Nikolaos in Crete.

Lato was an ancient city of Crete, the ruins of which are located about 3 km from the village of Kritsa, one of the oldest and most picturesque villages of Crete, built amphitheatrically on a rocky hill called Kastellos, surrounded by olive groves, at an altitude of 375 m.

The Doric city-state was built in a defensible position overlooking Mirabello Bay between two peaks, both of which became the city’s acropolises.

Although the city probably predates the arrival of the Dorians, the ruins date mainly from the Doric period (5th and 4th centuries BC). The city was destroyed c. 200 BC BC, but its port (Lato Etera or Lato pros Kamara) near Agios Nikolaos was used during Roman rule.

This has led to the confusion repeated by Stephen of Byzantium quoting Xenion, a Cretan historian, that Kamara and Lato were one and the same. Modern science distinguishes the two.

The city was most likely named after the goddess Leto (of which Lato is the usual Doric form) and may be mentioned in Linear B tablets as RA-TO. In ancient times, Lato also minted coins with the image of the goddess Eileithyia, who was apparently particularly worshiped in Lato.

Nearchus, admiral of Alexander the Great, was born in Lato.

Skulls on display in the Archaeological Museum of Agios Nikolaos

The Archaeological Museum of Agios Nikolaos opened in 1969 and is considered one of the most important in Crete. It has a rich collection of archaeological treasures dating from the pre-Minoan period (3000 BC) to the Roman period (2nd century AD).

It houses collections of very important archaeological finds from across the region of eastern Crete, stretching from Malia to distant Zakros. Its showcases include more than 1,500 pots and the oldest gold and bronze finds in Crete.

The museum’s exhibits include the finds from the coastal cemetery of Agia Fotia, the largest Minoan cemetery to be excavated, the terracotta figurine of the goddess of Myrtos, the golden needle, the stone pyxidio and the stone rhyton in the form of a Triton bowl .