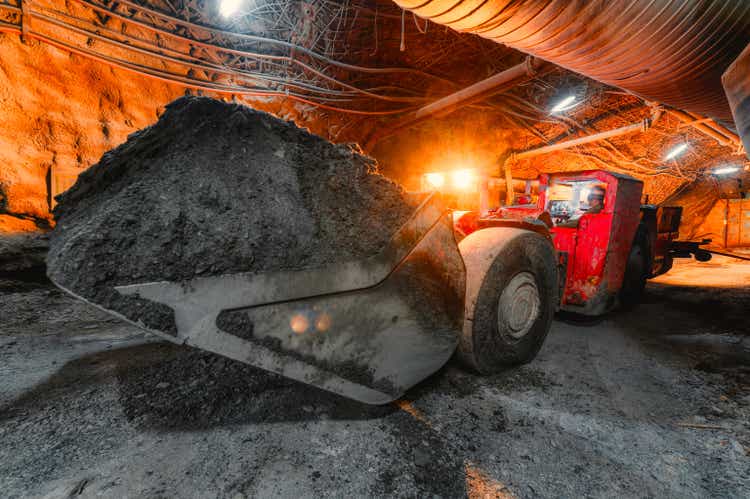 The Q1 earnings season for the Silver Miners Index (SIL) is upon us and one of the first companies to report results is Hecla Mining (NYSE: ST). Overall, the company had a weaker start to the year than 2021 and reported a 4% drop in silver production and a 20% drop in gold production. Fortunately, higher gold prices will offset some of that slack, and Hecla should see much higher production from Lucky Friday later in the year. While I don’t see the relatively weak first quarter production results as a problem, I still see Hecla as expensive relative to other precious metals names, which are trading above 1.60x P/NAV.

Hecla Mining released its preliminary first quarter results this week and reported quarterly production of ~3.32 million ounces of silver and ~41,200 ounces of gold. While this represented a sequential improvement in silver production after a tough H2 at Greens Creek Mine, year-on-year production was down sharply. This was primarily due to lower grades at Casa Berardi resulting from the mining of lower grade surface tonnages from Pit 160 and equipment delays that impacted mine sequencing at Lucky Friday. Let’s take a closer look below:

Thankfully, Lucky Friday had a solid quarter. Most importantly, the future for this mine continues to look very bright with the implementation of the new Underhand Closed Bench [UCB] Mining method expected to improve safety, tonnage and production. During the first quarter, Lucky Friday experienced a slight sequential decline in production due to equipment delays impacting mine sequencing during the period. However, silver production of ~888,000 ounces was above Q1 2021 levels (864,000 ounces) and should average over one million ounces per quarter for the remainder of the year.

A key differentiator for Hecla, and its Lucky Friday mine in particular, is that while many silver producers such as First Majestic (AG) operate on reserves with mine lives under 7 years, Lucky Friday has an industry leading 17 year mine life Life. This gives investors a great deal of insight into future production and certainly helps reassure investors compared to some other miners where we could see some assets halting production by 2030. As the chart below shows, Hecla calculates its silver/gold reserves at much lower prices but still has a very respectable mine life (14 years at Greens Creek).

Hecla’s attractive jurisdiction profile (Idaho, Alaska, Quebec) relative to peers combined with its industry-leading mine life at its two major rigs certainly justifies it trading at a premium to most of its peer group. The other differentiator I discussed earlier is that Hecla is better insulated than its peers from inflationary pressures due to operating high-grade, low-volume underground mines. This may not have been a topic of conversation for the past decade. However, with inflation readings in the high single digits, this is certainly a factor to consider when making stock picks in this sector.

Although it was a satisfactory start for Hecla’s silver operations, Casa Berardi eventually recorded much lower production, representing the Company’s Quebec gold mine. In the first quarter, the mine recorded gold production of only about 30,200 ounces, down from about 37,300 ounces in the fourth quarter and about 36,000 ounces in the same period last year. This was related to low quality surface tonnage from Pit 160 and was largely expected. However, this combined with lower gold production at Greens Creek impacted the Company’s gold production for the quarter.

The good news is that while gold production has declined, the metal price has helped Hecla a bit as gold trended higher in the first quarter and held above the $1,900/oz level in the second quarter. This should help offset some of the doldrums in the first quarter from a revenue perspective, which should be a difficult quarter given the tough year-over-year comps due to the attempted silver squeeze in Q1 2021 and silver’s strength in Q2. Assuming gold prices can average above $1,900/oz in the second quarter, Hecla will be able to outperform its tough competition better than I initially anticipated at the start of the year.

Hecla’s average realized silver price for the first half of 2021 was ~$26.40/oz, which is why I noted in previous updates that it would compare to difficult year-to-year comparisons.

The other good news is that zinc prices have shown no signs of slowing down and are at their highest levels in more than a decade. This will help Hecla with its silver operations from a by-products perspective and could help offset some of the cost increase from inflationary pressures. So with a solid first quarter reserve update, rising zinc prices and gold prices continuing to hover above $1,960/oz, Hecla is in a much better position than when I last updated it in February. Let’s take a look at the stock’s valuation below:

While Hecla’s year is off to a great start, and Lucky Friday’s production is set to increase throughout the year, I believe some of that positivity is priced into the stock. That’s because Hecla currently trades at about 17 times estimated operating cash flow for fiscal 2022, which is slightly above its 15-year moving average of about 15.1 times cash flow. From a P/NAV perspective, Hecla doesn’t offer much certainty here either. This is because it trades with a market cap of ~$3.65B versus an estimated NPV (5%) on its mining assets of ~$2.70B, with some value attributed to its Nevada operations will when they can be resumed.

At first glance this might seem like a minimal premium to NPV (5%) and it is certainly a reasonable valuation compared to First Majestic (AG). However, if we subtract ~$540 million for the company’s net debt and estimated G&A, Hecla’s net asset value is just under $2.2 billion. So Hecla is currently trading at just over 1.65x P/NAV, which is a high valuation for a company with just three assets, even if they’re located in Tier 1 jurisdictions. It’s important to note that this is a reasonable valuation that is relevant to other silver stocks across the sector. However, I see much better value elsewhere if we compare this valuation to all available precious metals producers.

Finally, on the technical picture, Hecla is currently trading in the upper part of its expected range, with overhead resistance at $7.30 and no strong support below it until the $5.45 level. That doesn’t mean the stock can’t go higher, but with a potential upside of $0.60 to resistance and a potential downside of $1.35 to support, the reward-to-risk ratio is 0 .44 to 1.0. To justify entering new positions, I generally prefer a reward-to-risk ratio of at least 5:1 for small-cap names, which would require a dip below $5.65 for Hecla to make the stock attractive . To sum up, the stock is far from a low-risk buy point right now.

For investors looking for primary silver producers to sleep well at night, Hecla is arguably the name of choice, with long mine lives, secure jurisdictions, and solid margins. Given the option to pay ~1.65x P/NAV for Hecla or less than 1.0x P/NAV for Alamos (AGI), the latter showing higher growth, I struggle to see any value proposition for Hecla. So if you must have exposure to silver, Hecla is a solid buy-the-dip candidate, but I still prefer other producers in other parts of the sector.