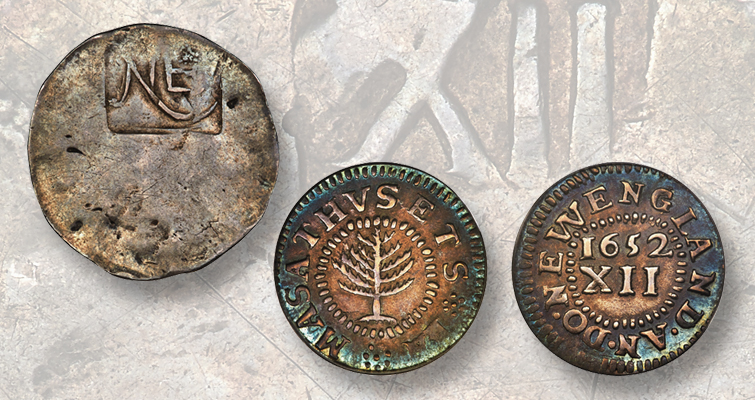 Salmon is a retired chest radiologist and the author of Massachusetts Silver Coins, published by the American Numismatic Society in 2010. His work updated previous ANS monographs on Massachusetts silver coins by Sydney P. Noe and created a chronological numbering system. As Christopher McDowell wrote in an introduction to the August session: “As you move through the catalogue, you can see the development of early American coinage before your eyes. Each subset within the series represents the first time a new minting technology has been attempted on American soil.”

Heavyweights from the October auction include two New England shillings, including a Salmon 3-B coin graded Very Fine 35 by Numismatic Guaranty Co., which is one of only six known examples of the grade. Heritage calls it “bold and distinctive” and praises “an attractive rose gold patina on the pleasantly reflective surfaces”.

It’s the second offering from Salmon’s collection of the strain, as another NGC-graded Extremely Fine Details, Damaged, sold for $69,000 at Heritage’s August session. Salmon wrote Massachusetts Silver Coins that these were early productions at the Massachusetts Mint by trained silversmiths. “Although experts in their craft, the silversmiths had no training or experience as minters… This is reflected in their earliest coins, made using the familiar techniques of their craft…” Their handcrafted quirks are one of the things that draw specialists into the series.

The craftsmanship of the early Massachusetts Mint developed, as seen in the Willow Tree design, and Salmon’s holdings include several examples of this type. A 2B Salmon coin in the auction, graded NGC Good Details, Damaged, shows extensive circulation marks and little visible detail except in the lower half of the tree and a faint impression of the tree’s baseline. It is the lowest rated of the 11 known strains.

More detail can be seen on an NGC Very Fine Details, Tooled graded Salmon 3-E Willow Tree shilling, with the typical faint design definition in the centers seen on most specimens of this type.

At the Coinage of the Americas Conference in 2014, Salmon explained that the Willow Tree shillings were often struck with intentionally inclined handstamps, while radially oriented strikes were applied serially around the periphery, resulting in a weak tree. E. Elliott Woodward wrote in an 1865 auction that the tree resembled a “palmetto tree,” although the term “willow tree” was used soon after. The coin offered is in the middle of the preservation count of the 13 reported specimens of the type.

Most collectors are familiar with the early Massachusetts silver Pine Tree shillings, coins minted on both small and large planch and preserved in decent quantities to make them affordable for a wide spectrum of collectors. A type collector might be drawn to Salmon’s Pine Tree, a Small Planchet shilling listed by NGC as Salmon 2-B with an About Uncirculated 58 rating and is a common variety. Heritage calls it one of the most commonly encountered variants of all Massachusetts silver coins, but the coin in the auction is characterized by a rich gold tint in the center and deeper tint on the edges. The design elements are visible and it’s well centered, making it a prime example of this type.

Another example of the strain for sale is NGC certified but unclassified, with NGC calling it “Corroded, Clipped.” In fact, it is badly corroded and significantly underweight, having been salvaged from the HMS feverham, wrecked in 1711 near the southeastern tip of Scatarie Island off Cape Breton, Nova Scotia.