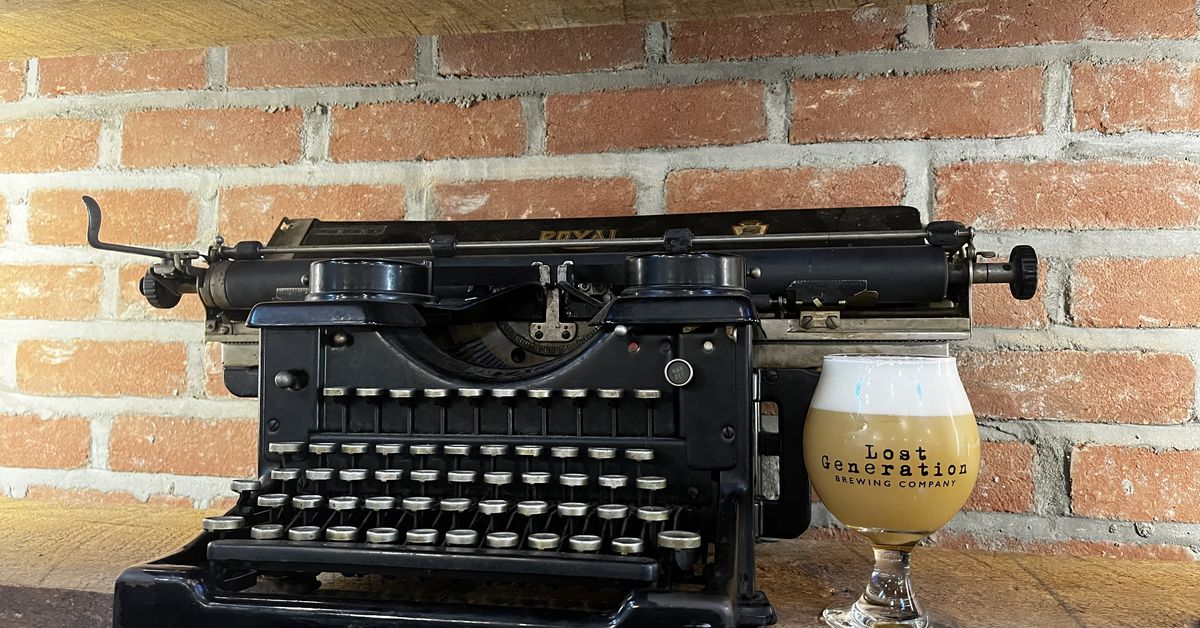 Husband-wife duo Jared Pulliam and Anne Choe have their own stories to tell. Pulliam is a teacher-turned-brewer and ran the show at Lagunitas in the west, while Choe worked at some of the wine country’s finest restaurants.

Lost Generation begins with a cast core of IPAs, lagers and seltzer fermented with fruit juice (strawberry lychees and mango passion fruit). There are two Kesselsauers, a tangy grapefruit gose ale and a dessert-style sour that tastes like peach a la mode. Also on tap: a wheat beer with Mandarina Bavaria hops called “Only a Sunny Smile” based on a famous line by F. Scott Fitzgerald.

Other beer titles and vintage decorations like books, metal gramophones, manual typewriters, and quotes on display pay homage to the brewery’s muses: legendary writers Gertrude Stein, Ernest Hemingway, and the Fitzgeralds. The unsterile brewery also gets a dose of color from a long mural by DC artist Kelly Towles.

“Lost Generation evokes themes from that era of art as well as a mix of modernity, as the notions of the lost generation are still poignant today,” says Pulliam.

Production is primarily driving the taproom, Pulliam says, with plans for “very limited” distribution. Kegs will soon be finding their way into DC and Virginia bars, notes DC beer. There’s also scope to add more silver tanks to the production facility, which is showcased behind a glass wall at the back. Stay tuned for the release date of a North German-style Pilsner.

The couple have 30 years of combined restaurant and brewing experience. Pulliam started professional brewing in DC as a side hustle while he was still a public school teacher, “doing chores while I bitched,” he says.

The duo have a long-term goal of opening a brewery and taproom here in their hometown. That was a decade ago, when pioneering brewery DC Brau was pretty much the only big game in town.

“Since DC was still in the early stages of beer, we knew we had to go into one of the epicenters of brewing culture to really grow,” he says.

So they moved to California, where he landed a dream job at Lagunitas Brewing Co., managing all three brewing divisions for five years. Choe also honed her hospitality trade by working at Sonoma’s cherished Girl and the Fig and all-female cocktail bar Drawing Board.

“Petaluma wasn’t Paris, but we had to leave to grow in our own jobs and really be around people who believe in the products we love as much as we do,” he says.

A pair of “Shift” lagers at Lost Generation pays homage to Pulliam’s early morning brews at Lagunitas and its Santa Rosa sibling Moonlight, when crushing a 6 a.m. beer after work was the order of the day. Lost Generation’s Grave Shift dark lager mimics Moonlight’s best-selling book, Death and Taxes. Its crisp “Shift” counterpart is made with Tettnang and Hallertau Blanc hops (4.7 percent vol.). The strongest of the bunch is the “Feather Kitty” (8% ABV), a hazy double IPA named after one of Hemingway’s beloved cats.

“We had to stop admission and start a line because we were busy for about six hours at a time,” says Pulliam.

Opening hours are Wednesday and Thursday from 4pm to 10pm and Friday to midnight; Saturday from 11 a.m. to midnight; and Sundays from 11am to 10pm (closed on Mondays and Tuesdays).

Food trucks will be parked on site shortly. For now, the fare is limited to bar snacks like jerkface jerky.

XAG/USD surges to fresh 3-week highs but retreated to $19.60