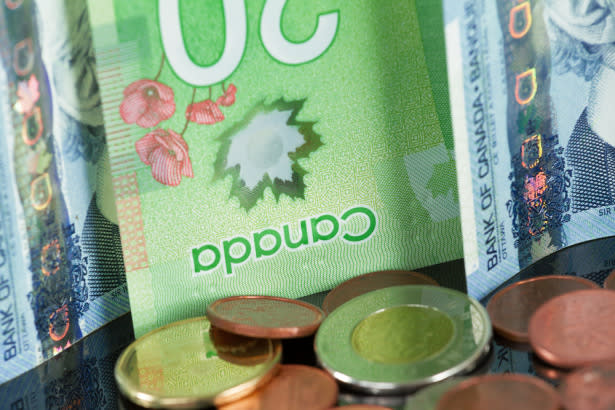 The Canadian dollar offset its losses after hitting a 10-week low against its US counterpart on Friday as a rebound in crude oil prices and stronger domestic employment data supported the commodity currency.

â€œCAD traded defensive for most of the week as fears over the spread of the Omicron variant rocked global markets and dealt a sharp blow to crude oil prices. The new, apparently more contagious, strain discovered in South Africa has been found in most of the world’s major countries and threatens the reintroduction of some containment measures and loss of household confidence, “said Shaun Osborne, chief FX strategist at Scotiabank .

â€œVery early signs suggest symptoms are milder, but markets await definitive evidence of the risks they pose before attempting a significant reversal. The S & P500 ended the week about 1% lower than last Friday after experiencing its worst two-day drop since October 2020. “

Today the USD / CAD pair rose to 1.2846 from Thursday’s closing at 1.2808. The Canadian dollar hit its lowest level in over two months last week. After gaining around 2.3% in October, the Canadian dollar weakened over 3.1% last month.

According to Statistics Canada, the Canadian economy added 153,700 jobs in November, well above analysts’ expectations of 35,000. As a result, the unemployment rate fell to 6.0%, better than the consensus estimate of 6.6%.

â€œAt the time of writing, USDCAD has apparently avoided (or at least tried to) a weekly close above 1.28 due to the strong Canadian jobs report. This offset the strength of the USD after US household survey data showed a sharp rise in jobs and an improvement in the employment-to-population ratio despite a disappointing non-farm payroll, â€added Scotiabank’s Osborne.

“From a technical perspective, USDCAD remains on an upward trajectory targeting a test of 1.29 once the middle 1.28 zone is broken, but the overbought conditions of the USD remain a short-term barrier to further dollar gains towards 1, 30, so that there may be a phase of consolidation around the current level. ” Support is 1.2750 followed by 1.2720 / 30 and the numbers zone; additional declines are offset by every half-cent mark or so. “

On the flip side, the dollar index, which measures the value of the dollar against six foreign currencies, traded almost unchanged at 96.157. The Invesco DB US Dollar Index Bullish Fund is designed for investors looking for an inexpensive and convenient way to track the value of the US dollar in relation to a basket of the world’s six major currencies – the euro, the Japanese yen, the British pound, Canadian dollar, Swedish krona and Swiss franc – traded -0.2% lower at 25.77 on Friday.

Last week, the minutes of the Fed meeting confirmed market expectations that the Fed will hike rates earlier than other major central banks. The greenback rose to 16-month highs against most other major currencies on the hottest US inflation rate in a generation, leading investors to bet that interest rates are likely to rise sooner than previously thought.

On the flip side, US non-farm salaries rose 210,000 jobs last month, falling short of analysts’ expectations of 550,000 jobs, according to the Department of Labor. In addition, the unemployment rate fell from 4.6% to 4.2%, the lowest level since February 2020.

However, it is very likely that the world’s dominant reserve currency, the USD, will rise by the end of the year, largely due to the expectation of at least one rate hike in the next year. With the dollar strengthening and the possibility that the Federal Reserve may hike rates earlier than expected, the USD / CAD pair could see a surge.

Canada is the fourth largest oil exporter in the world, up after OPEC + announced it would review its policy to increase production if demand wears off due to Omicron. Oil prices hit more than three-month lows on Tuesday after Moderna boss questioned the effectiveness of COVID-19 vaccines against the Omicron, which rocked markets and raised concerns about oil demand, Reuters reported.

At the time of this writing, US West Texas Intermediate (WTI) crude was trading 0.12% higher at $ 66.58 a barrel. Higher oil prices translate into higher US dollar revenues for Canadian exporters, resulting in a higher value for the loonie.

â€œThe 3 commodity units (AUD, NZD and CAD) now appear vulnerable on 2 fronts – (1) as risk currency trading in a risk free environment created by the new Covid strain; and (2) the 3 units have one of the more aggressive rate hike profiles of the central banks, discounted by the markets. However, versus the USD, the 3 units could find better support (as the USD is likely to be even more vulnerable to the suspension of more aggressive rates from the Fed), â€noted Citi analysts.