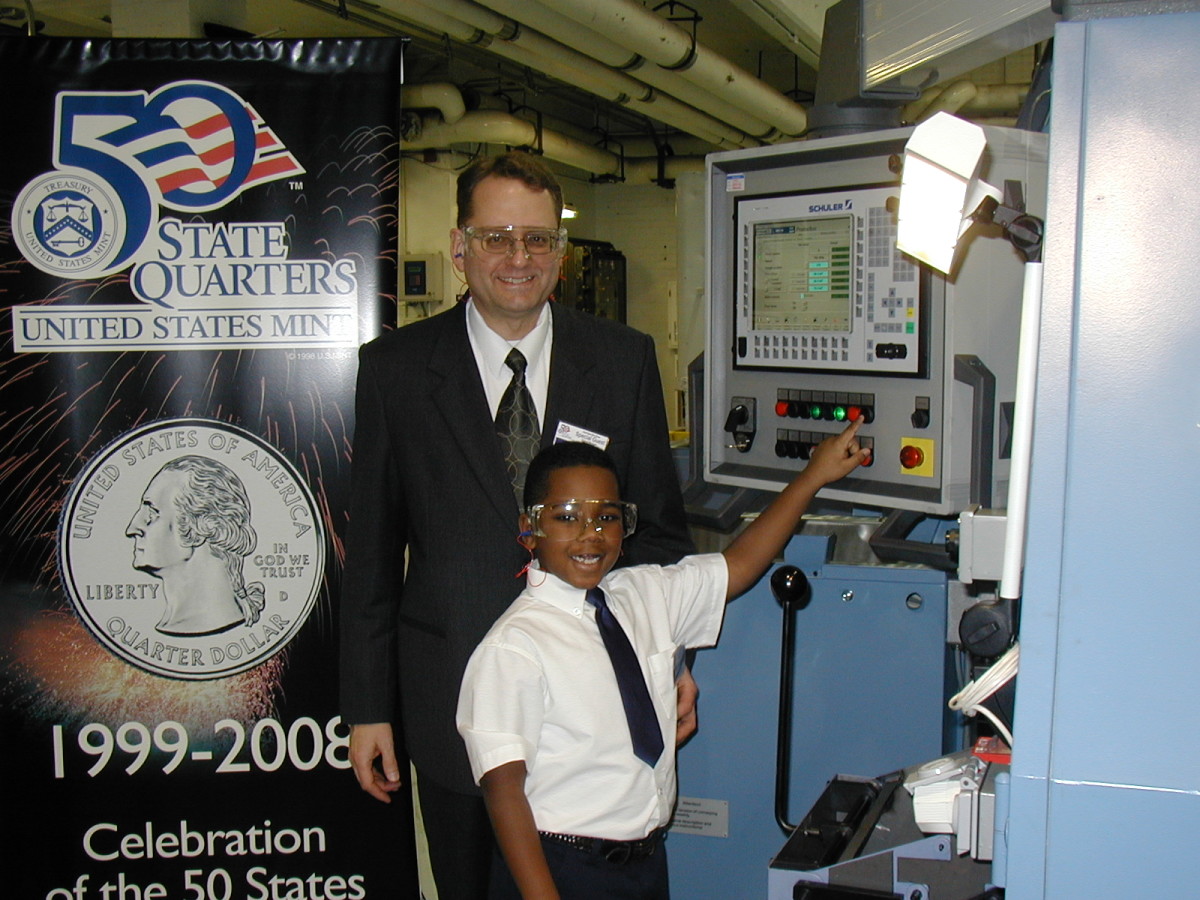 In last week’s column, I detailed my involvement in creating the 2004 Michigan Statehood district designs and the words I said and didn’t say in a meeting with Michigan’s governor that likely changed which design ended up being selected for this coin.

My exploration of numismatic history did not end here. At meetings of the Michigan Quarter Commission, I told the other members about the possibility of attending a first-cut ceremony at the US Mint in Philadelphia. The commission chairman asked the governor’s liaison with the US Mint to inquire about attending the event. After the third such request was sent to the US Mint, the information finally got through.

To our surprise, the Michigan Quarter Ceremonial Strike ceremony was held at the Denver Mint instead. Anyone wishing to participate must pass a security clearance and be at least 10 years old.

As a collector and dealer for decades, I was thrilled to send in my background check paperwork. I also sent in the documents for my 6-year-old son Daniel. I confirmed that he was less than 10 years old but asked if he could at least be an observer of the event. After three inquiries, the Mint’s response was, “We’re doing something.” So in January 2004, we both went.

When we arrived the day before the ceremony, a few of us met with someone from the Denver Mint to iron out the details of who would mint the coins and in what order. The ceremony was attended by 12 people, but no Michigan state official. When we found out that Tim Riley, Chief Operating Officer of the Denver Mint, was a Michigan native and attended college in the state (which probably explains why he wanted the ceremony in Denver), we gave him the honor of striking the first coin, which would go to the Michigan Historical Museum. Once again, to my surprise, Daniel was included in the strike ceremony along with the rest of us. He should beat the second specimen to be presented to the current Michigan governor. The 10-year-old son of another Michigan Commissioner minted the third coin, which went to the previous governor who appointed the commission. Then, in alphabetical order, the six commissioners minted their coins (I was No. 6). The other four guests would then mint their coins. The 10-year-old struck coin #14 as his personal keepsake, then Daniel ended the ceremony by striking #15 for his specimen.

Our local newspaper had a front page picture the next day of Daniel holding up coin #15 with me at his side. In the message was a quote from someone at the US Mint stating that Daniel was the youngest person they knew to have minted a US coin. I wanted to make sure I had the right quote, so I called the Mint press office.

I was told that it is true that Daniel was the youngest person they were aware of to have minted a US coin. However, they don’t keep those stats, so they can’t say he was definitely the youngest, although he probably was. But after I said that, I was told that they didn’t want to make a fuss about it either, because that’s not the aim of such ceremonies. If it drew a lot of attention, the next strike ceremony could ask to allow a 5-year-old to attend and eventually result in a newborn being part of a future ceremony.

So my son received his “15 Minutes of Fame” as a result of my numismatic activities.

I can imagine that I influenced some later numismatic events.

The US Mint achieved a then-record number of more than 30 million uncirculated Silver Eagle dollars in 2009, up 50 percent from 2008. Production was so busy that the mint decided not to mint the proof version at all that year .

In late 2009, it took me another flight to reach a status level, so I made a quick trip to Washington, DC, as a member of the board of directors of the Industry Council for Tangible Assets (now trading as the National Coin & Bullion Association). ), I visited some congressmen accompanied by the ICTA lobbyist. While visiting the office of then-Rep. (now Senator) Gary Peters, I happened to meet him there and knew he was also a numismatist. During the conversation I discussed how the Mint had decided not to mint 2009 silver eagle proof and that it would take a Congress to direct the Mint to do so. He expressed his willingness to support and possibly sponsor such legislation, but it never got beyond this discussion.

On October 13, 2016, the US Mint hosted its first Numismatics Forum to solicit input from select members of the numismatic community. When I attended the event, I presented a document outlining the Mint’s Strengths, Weaknesses, Opportunities and Threats (SWOT). Under Opportunities, the very first item identified various possible future coin programs that the Mint could produce. The very first of these were “historical inventions of the state”. This analysis was included in my October 21, 2016 column.

Within two months, legislation was passed in Congress for the American Innovation Dollar coin series, which debuted in 2018. I have not heard from anyone at the US Mint that my suggestion had any impact on this happening. It certainly could easily have been suggested by any number of sources. But is it possible that what I wrote had any influence?

On October 25th and 26th, 2019, the US Mint held its Fourth Numismatic Forum. During the program, I suggested to then-Mint Director David Ryder that one way the Mint could increase its “profits,” and also attract collector interest, was to add a few million extra half Kennedy dollars each year, plus a few Bring millions of dollars into public circulation each of the American Innovation Dollars. He asked me to send this proposal in writing to one of his associates, which I did over the next week. The text of this letter is published in my column of October 31, 2019.

Although no formal program has been announced to circulate small amounts of halves and dollars, the mint has actually been doing so for the past year or so. Did this happen because of my suggestion? I doubt it. But maybe it was.

The point of these reminders is that if you have an idea that could influence the numismatic story, please comment. You never know what might end up happening.

XAG/USD rallies above $22.10, shaking off flood of US data pre-NFP

Why Hecla Mining, First Majestic and Other Gold and Silver Stocks Sizzled Today