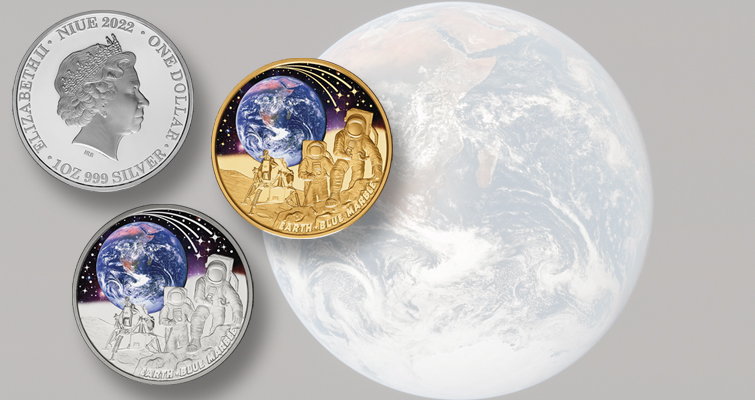 the Blue marble, One of the most iconic images of American space exploration is the theme of two new Niue 2022 coins.

The blue marble the iconic photo of the earth, taken by the Apollo 17 astronauts in 1972, appears in vibrant colors on the $ 999 fine silver and $ 999 fine gold coins.

The photo was taken during the last manned mission to the moon. On the way there, the astronauts took the famous photo.

The blue marble was recorded from approximately 18,000 miles above the planet’s surface.

The photo shows mainly the earth from the Mediterranean south to Antarctica. This marked the first time an Apollo mission trajectory made it possible to photograph the south polar ice cap. In addition to the Arabian Peninsula and Madagascar, almost the entire coastline of Africa is clearly visible. In the north and east, the Asian mainland is on the horizon.

For the astronauts, the slightly curved earth had the appearance and size of a glass marble, hence the name. It is most often shown with Antarctica at the bottom, the traditional map perspective, although from the astronauts’ actual point of view, Antarctica appeared at the top of the picture.

Back then, The blue marble has been reproduced on newspaper titles around the world.

“It has become even more meaningful since then, as it has given humanity a new and humiliating perspective on their own fragility and that of the earth in the otherwise lifeless void of space,” said the coin distributor, Talisman Coins.

The obverse of each coin shows Queen Elizabeth II in crowned profile to the right. Her portrait with a tiara and pearl earrings was done by the sculptor Ian Rank Broadley.

The reverse of each coin shows two Apollo 17 astronauts with cameras in the foreground, exploring the lunar surface in front of their lunar module.

The three falling stars above the earth represent the three Apollo 17 astronauts who were the last to reach the moon: Eugene Cernan, mission commander; Harrison Schmitt, Lunar Module pilot; and Ronald Evans, pilot of the command module.

The coins show Cernan and Schmitt on the lunar surface; Evans stayed high in orbit in the command module.

Each coin is in a luxurious shell-style presentation case lined with black velvet and satin and protected by a colored outer cardboard box. An individually numbered certificate of authenticity is included.

To order or to learn more, visit the retailer’s website, www.talismancoins.com.