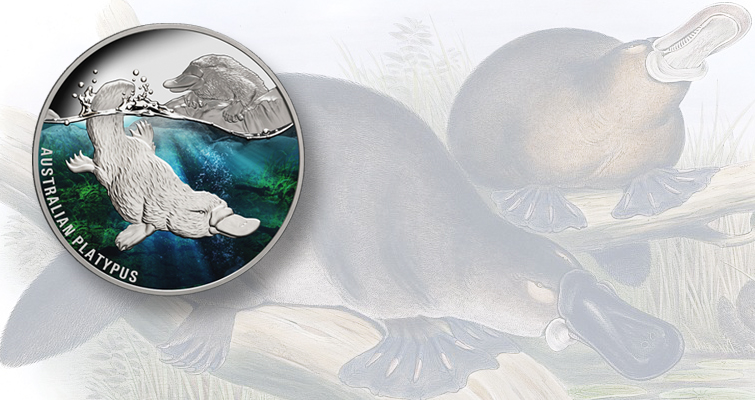 The platypus is arguably the strangest animal in Australia and arguably anywhere on earth.

The platypus is the subject of two new colorful 2022 precious metals commemorative coins from Niue, a $0.999 fine silver dollar proof and a $0.9999 fine gold $100 proof coin.

The duckbill platypus (Ornithorhynchus anatinus) is a semi-aquatic mammal endemic to eastern Australia, including Tasmania.

The bizarre appearance of this egg-laying, venomous, duck-billed, beaver-tailed, otter-footed mammal puzzled European naturalists when they first saw specimens from Australia – some even thought it was an elaborate hoax.

The characteristics of the platypus make it an important subject in the study of evolutionary biology and a recognizable and iconic symbol of Australia.

It’s one of the few venomous mammals — the male platypus has a spur on its hind foot that emits venom that can cause severe pain in humans.

In traditional Australian culture, the platypus holds a very special, almost sacred, role and is one of the few animals whose hunting or consumption is considered taboo.

Both coins bear a similar design, depicting a pair of platypuses in their natural habitat on their reverse, which is colored.

The lifelike design features an adult platypus diving into a river while its partner looks on from the bank. Meticulously and realistically rendered, the Frosted Cameo Proof animals are detailed enough to discern individual hairs.

The obverse of each coin bears the Ian Rank-Broadley effigy of the late Queen Elizabeth II in crowned profile to the right.

Both coins are similarly packaged, encapsulated in a clamshell style presentation box, lined with black velvet and satin and protected by a full color outer cardboard box. An individually numbered certificate of authenticity is included.

The silver coin weighs 31.135 grams and measures 38.6 millimeters in diameter.

For more details or to order the coin, visit the retailer’s website at www.talismancoins.com.