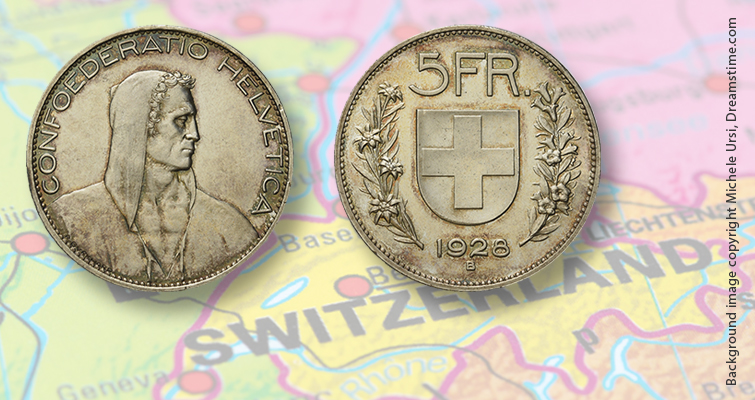 Switzerland’s transition to a lighter silver 5-franc coin in 1928, coinciding with the dissolution of the Latin Monetary Union, resulted in an important modern Swiss rarity.

The company’s May 6 auction highlights what could be the best example of this coin, according to auction house Rapp.

Switzerland was a founding member of the Latin Monetary Union in 1865. Several nations undertook to circulate coins across national borders, but needed a uniform coin standard to do so. The 5 franc coins then in use (since 1850) contained an actual silver weight of 0.7234 ounces (slightly less than a silver Morgan dollar).

In December 1925, the Belgian government informed the French government that Belgium would leave the monetary union on January 1, 1927. Shortly before that date, the Swiss Federal Council announced that it considered the Union dissolved due to Belgium’s withdrawal.

When the Swiss also broke away from the union, the country was able to direct how its coins would be made, including eventually reducing the amount of silver in the 5 franc coin (to 0.4027 ounces actual silver weight, which became the standard for the denominations up to 1969, except for 1968 issues).

However, a law for the production of the new, lighter 5-franc coins was not passed until September 9, 1931, although it was already clear in the summer of 1928 that new 5-franc coins would have to contain much less silver.

While Switzerland produced 23,971 examples of the 1928 5-franc coin to the pre-dissolution Union standard, most were apparently sent directly from the National Bank to the mint to be melted down and made into new, smaller 5-franc coins .

“That’s why the 5-franc piece from 1928 is much rarer on the collector’s market than the embossing number would suggest,” says the company.

The best aperitivo bars in NYC