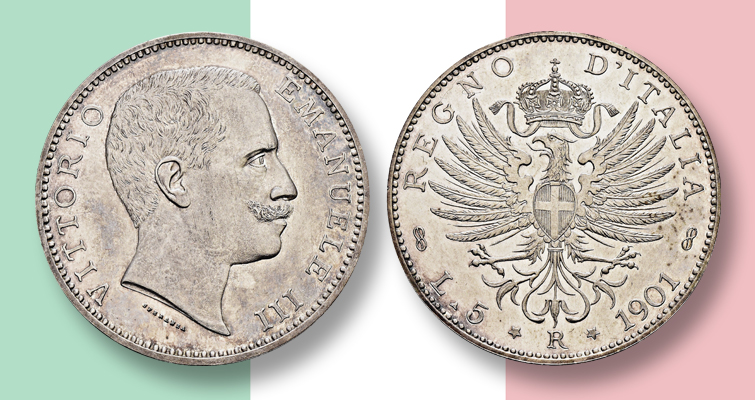 King Vittorio Emanuele III. of Italy, who ruled from 1900 to 1946, was a noted collector of coins.

The overlap between his reign and a curious coinage practice led to the creation of a rare coin, a specimen of which will be offered at Sincona AG Auction No. 76 in Zurich on May 17th.

The silver 5 lira coin from 1901, the young king’s first crown, is part of the Annemarie and Gerd Köhlmoos collection.

Italy’s production of the coin (at the Rome Mint) exceeded the amount of silver coins specifically allowed by the Latin Monetary Union for large silver coins, according to the auction house.

After a protest from France, all but 114 copies were melted down. The remaining pieces were given away by the king as gifts to members of the royal family and their friends, as well as dignitaries and government officials, and over time many were sold to collectors.

This made these coins a renowned rarity from the start.

A letter is known in which the king wrote to one of his administrators, Egidio Osio: “I received the first issue yesterday, this scudo will be of rarity as only a few pieces will be minted.”

The coin in the auction is graded with uncirculated detail thanks to minor hairlines by Numismatic Guaranty Co.