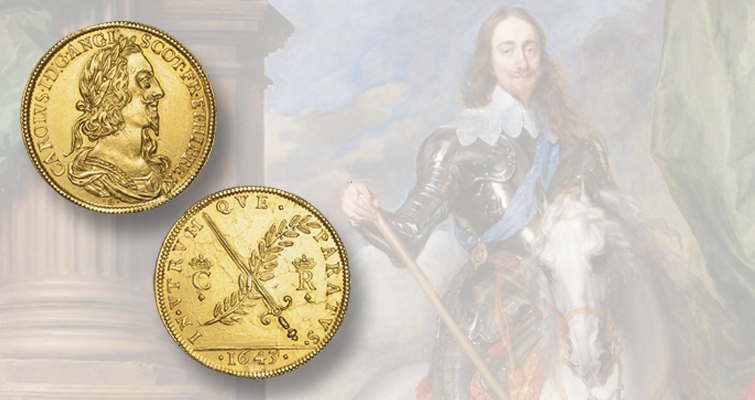 Charles I of England was a key figure in the English Civil War, from whom numerous numismatic objects descend.

A gold medal issued in 1643, some six years before his execution, is part of the Noonans auction on 23 November in London from the Jerome J. Platt collection of 17th century medals.

The Peace or War Medal was designed by Nicholas Briot. The obverse shows a laurel-draped bust of Charles I facing right, with inscriptions noting his royal title.

The reverse bears the Latin legend VTRVMQVE PARATVS, which roughly translates to ‘ready for both alternatives’ or ‘ready for both’, with a crossed sword and an olive branch.

Issued shortly after Prince Rupert took Bristol, this medal, bearing the symbols of the olive branch and sword, appears to have been intended to show the king’s confidence in his own position and his willingness to take one of two courses to embark, the company said.

The medal type is cataloged as Bucket 142 in British commemorative medals and their values by Christopher Eimer, but is not listed in gold (there are also bronze and silver versions).

The medal weighs 10.24 grams and measures 29 millimeters in diameter, slightly lighter and smaller than a copper-nickel clad Kennedy half dollar.

The medal has been tucked over the King’s head and boxed (metal moved/repaired), particularly on the reverse, but is otherwise almost extremely fine, according to Noonans, which has given a pre-sale estimate of £2,000 to £2,600 ($2,298 to $2,987 in US funds).