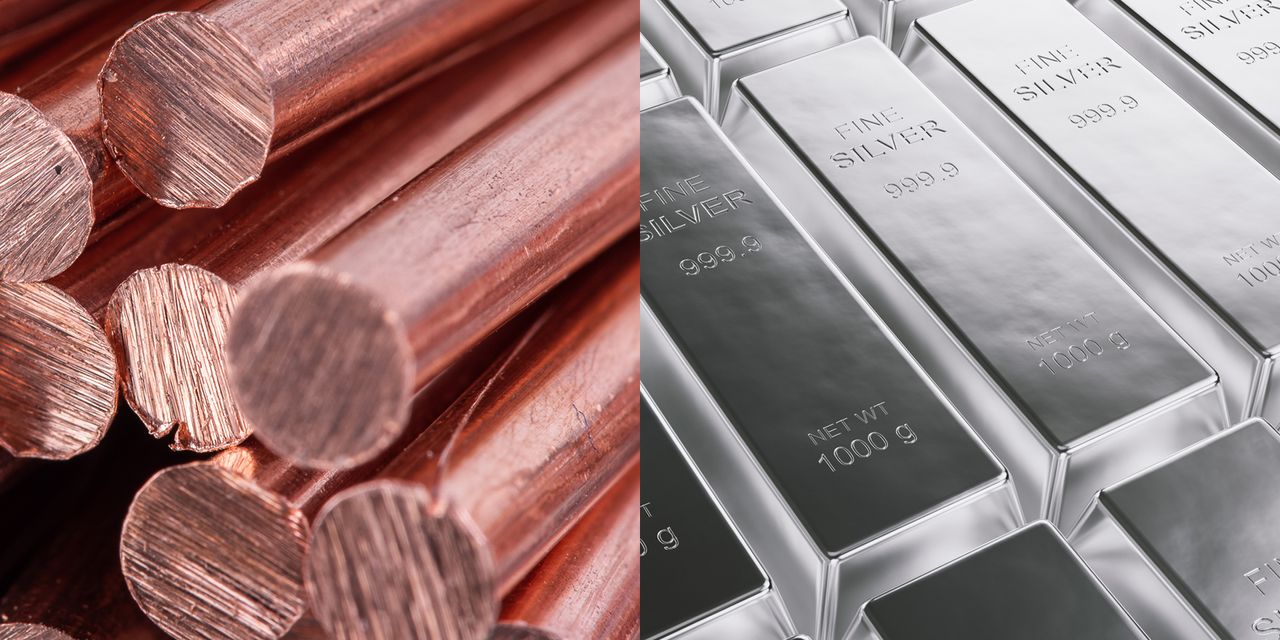 The story of two metals: why copper and silver went their separate ways this year

The copper and silver markets have taken different paths this year, with a global economic recovery from the pandemic and scarce supplies contributing to a third straight year of profits for copper, but silver has not gained momentum and is well on its way to suffer its biggest annual loss since 2014.

““If copper generally outperforms silver, it means that expectations for the global economy are very optimistic.””

Expectations for economic growth rose this year and then eased around mid-2021, but the tension in the copper markets provided “excellent support,” he says. For the first eight months of this year, the world balance of refined copper was in an apparent deficit of about 107,000 metric tons, according to a report by the International Copper Study Group last month.

Copper has shifted into a “fundamental deficit” due to strong Chinese consumption growth, on top of interruptions in copper mine production, said John Mothersole, director of research, pricing and purchasing at IHS Markit.

The emergence of the coronavirus delta variant meant that “the ‘friction’ in the global supply chains lasted longer than previously expected,” he says. The recovery in copper mine production did not begin until July and has so far been “relatively restrained”. That is set to change in 2022, but the deficit and slow recovery have supported prices over the past year.

IHS Markit expects copper consumption growth to slow from 4.7% this year to 3.6% in 2022, largely driven by weakness in China’s real estate development sector, Mothersole says. Refined manufacturing growth could rise more than 5% next year, from less than 4% this year, he says.

Silver, meanwhile, has been “hurt by the softness in key end markets, particularly the jewelry market,” says Mothersole.

Since December 8th, copper futures have been traded HGH22 since the beginning of the year,

up almost 25% after hitting an intraday high of $ 4.888 a pound in May, which is the highest intraday value on record, according to FactSet data. Silver SIH22,

has decreased by 15% and has thus exceeded the decrease in gold futures GCG22 by almost 6%,

Silver has a much “smaller percentage of industrial metals and is mostly viewed as a high beta version of gold,” so when gold falls, silver falls even more, says Norbury Partners’ Nascimento.

The industrial metal properties of silver will “not be price-relevant in the near future,” he says, adding that the precious metal has probably not yet reached a bargain price level, real interest rates are likely to be higher next year. This would likely lead to precious metals underperforming. Silver futures hit intraday lows of less than $ 22 an ounce in late September.

Silver supply is expected to increase in 2022 as current prices of $ 22-23 “incentivize mine production,” said KC Chang, chief economist, nonferrous metals, pricing and purchasing at IHS Markit. Industrial demand will face headwinds for the next year, he says.

Copper is set to continue its price hike next year.

“Smart investors will see how tight the [copper] The market is and will remain for the next few years, ”and prices will rise, says Nascimento.

For silver, the positive outlook for growth and inflation will drive real interest rates higher and dampen both silver and gold prices, he says.