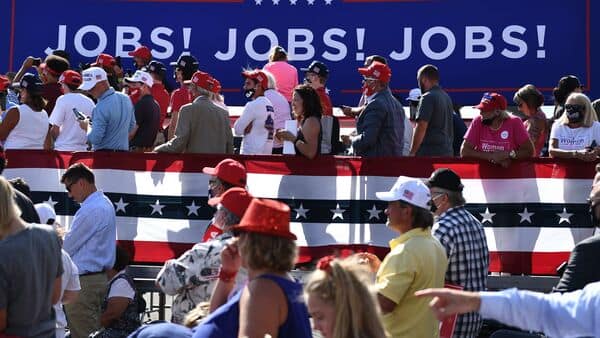 US job vacancies fell by the most in just over two years in June as demand for retail and wholesale workers eased, but overall market conditions remain tight, allowing the Federal Reserve to hike interest rates further.

Despite the sharper-than-expected drop in job vacancies reported by the Labor Department in its Job Openings and Labor Turnover Survey (JOLTS report) on Tuesday, the job market still favors workers. At least 4.2 million workers voluntarily resigned their jobs in June and the number of layoffs fell.

Vacancies are among several metrics closely watched by Fed officials. In its fight against inflation, the US Federal Reserve has raised interest rates sharply and pushed the economy to the brink of recession.

“The job market is cooling, but the temperature drop is far from a slump,” said Nick Bunker, director of economic research at Indeed Hiring Lab in Washington. “The prospects for economic growth may not be as rosy as they were a few months ago, but there is no sign of any looming danger in the labor market.”

Job vacancies, a measure of labor demand, fell by 605,000 to 10.7 million on the last day in June, the least since September 2021, the JOLTS report showed. The drop in June was the largest since April 2020, when the economy was reeling from the first wave of the COVID-19 pandemic.

Job vacancies have been falling since hitting a record high of 11.9 million in March. Still, job openings are nowhere near as low as they were during the Great Recession 13 years ago.

Economists polled by Reuters had forecast 11.0 million job vacancies. The Fed is trying to dampen labor demand and the broader economy to bring inflation down to its 2% target.

The central bank increased its key interest rate by a further three-quarters of a percentage point last week. It has now raised this rate by 225 basis points since March.

The government reported last week that the economy contracted 1.3% in the first half of the year. Wild swings in inventories and the trade deficit associated with knotted global supply chains were largely to blame, although overall economic momentum has cooled.

“The JOLTS report overall is one of many jobs indicators that don’t look ‘recessionary,’ despite weaker signals from some other economic indicators,” said Daniel Silver, an economist at JPMorgan in New York.

In retail, job vacancies fell by 343,000. The wholesale industry had 82,000 fewer vacancies, while state and local education reported a drop of 62,000 vacancies.

The number of new hires fell to 6.4 million from 6.5 million in May. In June there were 1.8 jobs for every unemployed person.

About 4.2 million people quit their jobs in June, up from 4.3 million in May. The termination rate remained unchanged at 2.8%. It is seen by politicians and economists as a measure of confidence in the labor market. The high churn rate suggests wage inflation is likely to continue for a while.

The government reported last week that wages and salaries rose 1.4% in the second quarter after rising 1.2% in the January-March period. They accelerated 5.3% year over year, the largest increase since the current series began in 2001.

The number of layoffs fell to 1.3 million from 1.4 million in May. The layoff rate remained unchanged at 0.9%.

This story was published from a wire agency feed with no changes to the text.