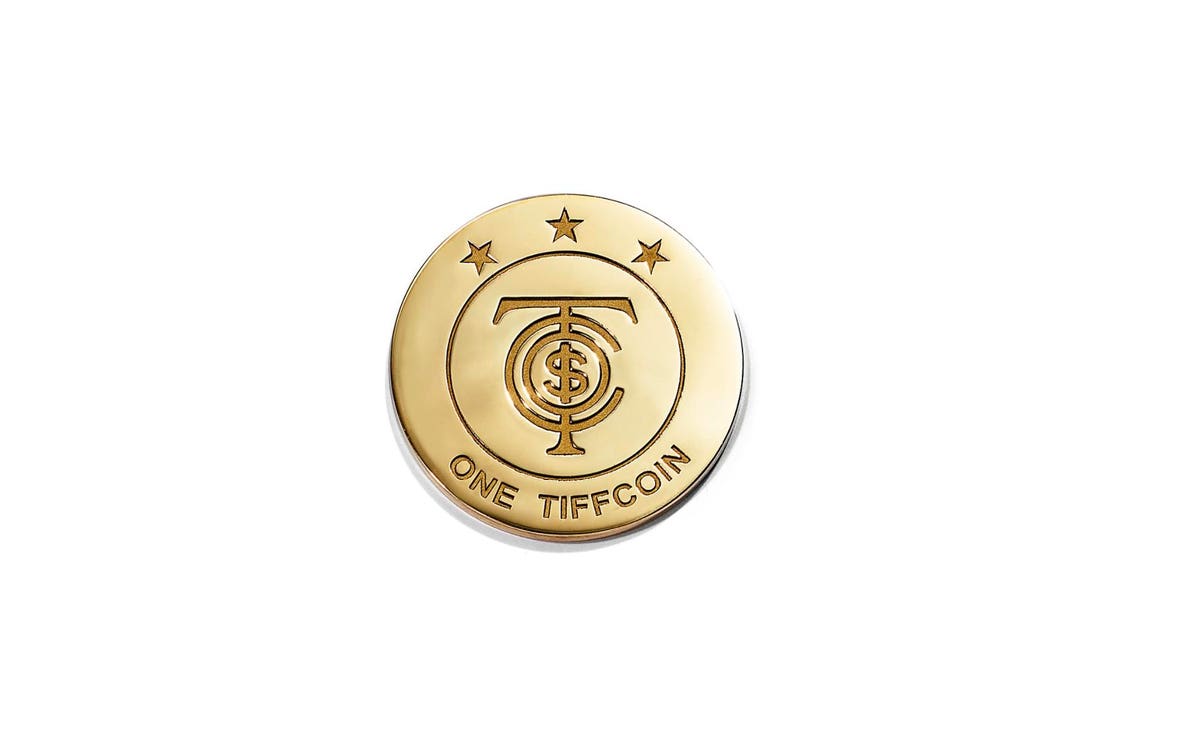 Why this TiffCoin April Fool’s joke was semi-genuine by Tiffany & Co, 499 were minted in 18k gold

“We’re launching our own cryptocurrency called TiffCoin with exclusive product launches, NFT releases and invitation-only events for top TiffCoin owners!” reads a post on Twitter. “Put some gold in your wallet with #TiffCoin.”

However, while later posts revealed that the cryptocurrency aspect was a joke, it appears that the coins actually exist IRL. As stated on April 2nd on both the brand’s social media and its own website, 499 of these coins were actually minted in 18k gold and available for a limited 24-hour period on tiffany.com for $9,999 each.

“We inherited a giant Sleeping Beauty and I think it’s waking up fast,” Ledru said in a recent interview with WWD.

Following LVMH’s $15.8 billion acquisition of Tiffany in 2020, Ledru was named CEO in January 2021. He came from Louis Vuitton, where he served as vice president of commercial activities.

Working alongside Ledru is Executive Vice President of Product and Communications, Arnault scion and former CEO of Rimowa, Alexandre Arnault.

In fact, it was Arnault who spearheaded Tiffany’s star-studded campaigns like “About Love,” starring Beyoncé Knowles and Jay-Z and a painting by Tiffany Blue Basquiat, a sell-out collaboration with Supreme, and the appointment of other celebrity ambassadors, including Black Pink’s Rosé.

Arnault himself, who has a Cryptopunk NFT as his Instagram PFP, was no doubt also the driving force behind the “TiffCoin” which fell on Saturday morning and featured a “Buy Now” button on Tiffany’s e-commerce homepage, referring to the product appeared prominently.

As described in the product copy, the TiffCoin is “a tribute to our history of creating ‘Tiffany Money'”.

As previously mentioned, the exclusive 18k gold coins are individually engraved, numbered and packaged in custom Tiffany Blue dust bags. The size is 34.8mm in diameter, thickness is 2.8mm and purchase is limited to one per customer.

According to Tiffany’s website, TiffCoin holders get access to “Tiffany events that add a lot of glamor to the Metaverse.” Admittedly, this is a somewhat dubious claim considering these events are unspecified, but are likely a tongue-in-cheek reference to many similarly unspecified utilities offered by countless NFTs.

The historical reference to “Tiffany Money” is real enough. The brand began minting silver coins redeemable for physical goods in the 1970s.

Specifically, a disclaimer under the product copy for TiffCoin read: “TiffCoins cannot be issued as actual currency – crypto or otherwise – but why would you want that?”

Earlier this year, a vintage 1974 advertisement in Tiffany magazine sold on Ebay for $16.99. The text reads “Tiffany Money in sterling silver is a brand new wedding gift idea.”

“The bride can use them to complement her registered choices of silver, crystal and china… Give her one, ten or a hundred, Tiffany Money is the one gift a bride cannot have too many of.” Plus, after the honeymoon, she doesn’t have to carry as much to barter.” In 1974, each coin was priced at $25, redeemable for $25 worth of merchandise.

The ad proves that an irreverent approach to marketing at Tiffany is not without historical precedent.

The pandemic gave a boost to outdoor dining in Rochester