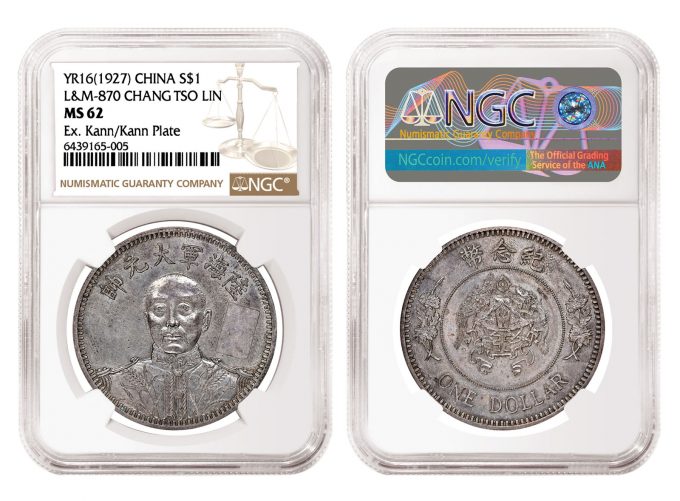 Several rarely seen and very valuable Chinese vintage coins certified by the Numismatic Guaranty Company (NGC) are offered in a sale presented by Taisei Coins and The Royal Mint. Tenders are already underway for the sale, which will take place in Japan on April 29, 2022.

A few days before the sale, one of the coins had already fetched a bid of over 205,000,000 yen (over $1.6 million): a Chang Tso Lin silver dollar from China YR16 (1927), graded NGC MS 62. NGC recently restored this coin’s pedigree with the Eduard Kann collection and the plate coin in Kann’s Illustrated Catalog of Chinese Coins. (To learn more about how NGC restored the family tree, click here.)

The coin (Lot 269) features Chang Tso Lin, a Manchurian warlord who eventually seized China’s top post in 1927 before being assassinated the next year. His coins are known only through a series of designs that, on the incredibly rare occasions they appear at auction, arouse intense collector interest.

Another coin that has attracted enthusiastic bids is a China 1867 Shanghai Tael – With Rays, graded NGC PF 63+ (Lot 218). A few days before the sale, the bid was more than 25 times its starting price of 4,000,000 yen (about US$32,000). Struck by the Hong Kong Mint, this particular coin features both Chinese and British features (including the Royal Coat of Arms of the United Kingdom). Chinese government officials rejected the proposed design and nearly all were melted.

Another rare coin on offer is a China YR29(1903) Tael – Restrike graded NGC MS 63 (Lot 219). The obverse of the coin depicts a dragon surrounded by the legend 29TH YEAR OF KUANG HSU and HU POO. Kuang Hsu was Emperor of China from 1875 to 1908, while Hu Poo refers to the Monetary Authority in Beijing.

In addition to the coins highlighted here, the auction also includes rarities from Great Britain, including a Henry VII Sovereign hand-stamped in gold, as well as other world rarities. To find out more about the British coins on offer click here. To learn more about other world rarities, including a German New Guinea Gold Coin and an Early Proof Japanese Yen, click here.

Other NGC-certified highlights from China on offer include:

Starting prices are provided by the auction house. The $ symbol represents US dollars.

With more than 53 million certified collectibles, NGC is the world’s largest and most trusted third-party grading service for coins, tokens and medals. Established in 1987, NGC provides an accurate, consistent, and impartial assessment of authenticity and grade. Every NGC-certified coin is backed by NGC’s comprehensive guarantee of authenticity and quality, giving buyers more confidence. This results in higher realized prices and greater liquidity for NGC-certified coins. To learn more, visit NGCcoin.com.