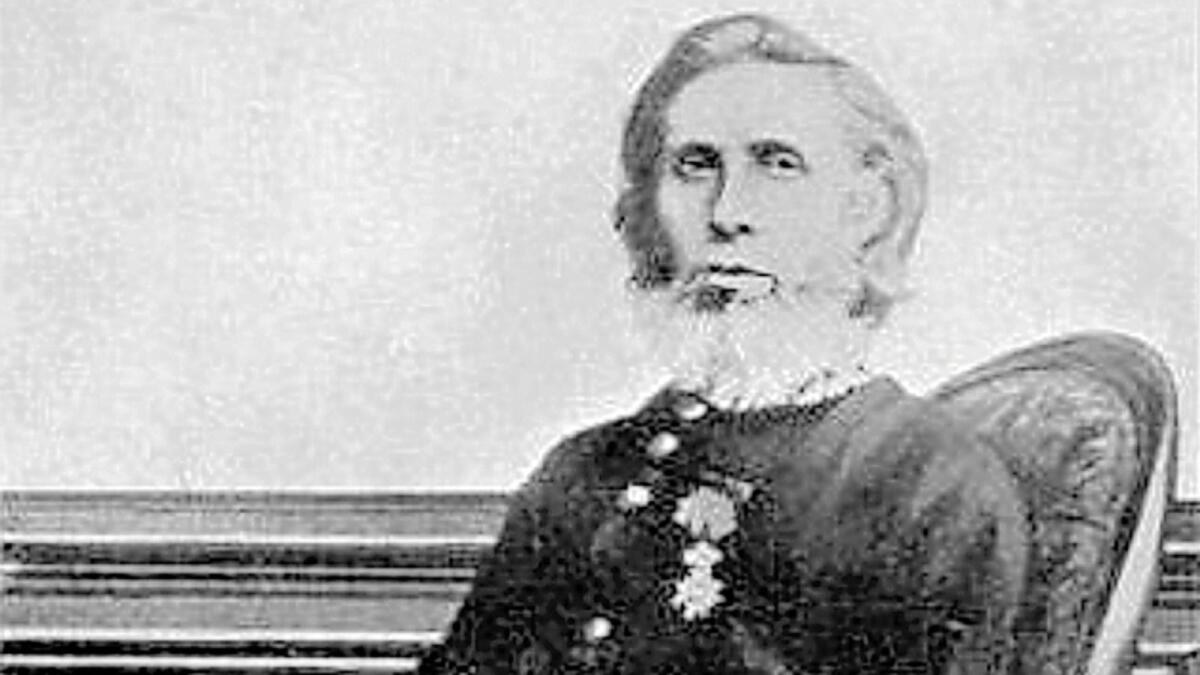 In 1863 Sir William Wilde (Oscar’s father) reported on the excavation of a crannog on Tonymore Lough. Historian Jonathan Smyth tells us more in his Times Past column…

An issue of the Journal of the Royal Irish Academy published in 1863 contains an informative description of the excavations carried out at Tonymore Crannog on Lord Farnham’s estate in County Cavan. Then, on Monday January 26, 1863, Sir William Robert Wills Wilde delighted the members of the Academy with a lecture on the discoveries made; Wilde served as both vice president and secretary of foreign correspondence with the company.

By profession, William Wilde FRCSI was a distinguished eye surgeon, Queen Victoria’s ordinary ophthalmologist, a prolific author and father of Oscar Wilde, the celebrated Irish wit and literary genius whose star still shines brightly. William’s own written works covered a wide variety of subjects, often covering the medical front, archaeology, travel, folklore, and other subjects. Books written by Wilde senior include The Epidemics of Ireland; The Last Years of Dean Swift’s Life; Practical observations on ear surgery and the nature and treatment of diseases of the ear; The Beauties of the Boyne and the Blackwater; The narration of a voyage to Madeira, Tenerife and along the shores of the Mediterranean Sea; and then there were his scholarly contributions to journals such as the Royal Irish Academy; and The Irish Builder.

A wild foray into Cavan’s ancient past takes us on a voyage of discovery to the Crannóg at Tonymore, where much of the record deals with the ‘later occupation’ of the artificial lake island. Sir William’s paper, which he read to his colleagues, states: “On January 23rd, 1860, I transmitted to the Academy a report of a newly discovered Crannóg on the property of Lord Farnham in the townland of Cloneygonnell, Parish of Kilmore, Barony of Lower Loughtee… the appearance of this crannog was then that of a green oblong hill cut in part by the railway line (for the MGWR) from Crossdoney to Cavan, from which town it is about two miles, a mile from the old cathedral church of the diocese, and about 500 meters from Tonymore Castle ruins.’

As an aside, an 1864 issue of the Journal of the Royal Irish Academy suggests that Tonymore Castle may have been the residence of Hugh O’Reilly, Catholic Bishop of Kilmore, in the 1630s when Bishop Bedell was nearby neighborhood lived.

Tonymore Lough, on which the artificial island rested, was described by Wilde as a small lake a quarter mile across, and the drying up of the Crannóg was aided by drainage works carried out around the lake in the 1850s. One report indicates that the lake had to be drained at the time the railway line was laid, as the ground in the locality was quite swampy. Incidentally, the strength of the Crannóg was shown by the fact that part of it could hold the railroad tracks and carry the trains passing over them. Sir William surmises that the Crannóg was a safe retreat for the ancient Cavan dwellers who lived in an area surrounded by rats such as ‘Shancloon’ and ‘Cloneygonnell’. He also spoke of the excellent pike fishing for which Tonymore Lough was celebrated and lured fishermen to its rippling waters.

Wilde particularly thanked Mr. O’Brien, Cavan’s ‘intelligent’ stationmaster, who first told him about Tonymore Crannóg and then delighted the Academy with a fruitful donation of material discovered at the archaeological site. From O’Brien’s information we learn that the island rested on oak beams placed in “layers” and that various artefacts were easily discovered beneath the surface of the earth. They were items containing millstones and two elk heads, one of which remained in Lord Farnham’s possession. Under the direction of the noble landowner, Dr. Malcolmson of Cavan to conduct further investigation of the site.

On behalf of Lord Farnham, Wilde then presented the Royal Irish Academy with 41 silver coins, all of which were safely recovered from the Crannóg. The archaic hoard was from the reigns of Elizabeth I, James I and Charles I, with the journal noting that the money, although of a later date, would make a major contribution to the ‘extensive’ collection that now being accumulated by the Academy. Wilde hoped that with the competent help of “some numismatist” the coins and other similar items could be properly arranged.

I recently discovered evidence of a relic called the Bloody Bell, the Clog na fuila, kept near Bailieborough. Apparently, since it was used for healing or to ward off spirits, I could find very little to add to my knowledge of the bell’s ritual purpose other than to say that the bell had to be swung in three times with the help of an attached cord, making a circular one Movement around the besieged person’s head. A mention of the Bailieborough bell is found in an article on “primitive bells” from the Proceedings of the Society of Antiquaries of Scotland, vol. 1, published in 1855. Its author, Mr. Bell of Dungannon, made the following comment on such objects and their resemblance to ecclesiastical handbells found in Scotland: ‘The barbaric uses, the judicial purposes, requisitioned for the bells were, the wonders about which they are related, and the reverence with which they were regarded, render relics of this kind valuable, as illustrating ancient Celtic mores, and connecting them with the history of both the Irish people and the Scottish prisons which possessed “the same heavenly bells.” ‘

As John Donne might say, “For whom the hour has come; It’s ringing for you.”

Look into my crystal ball…